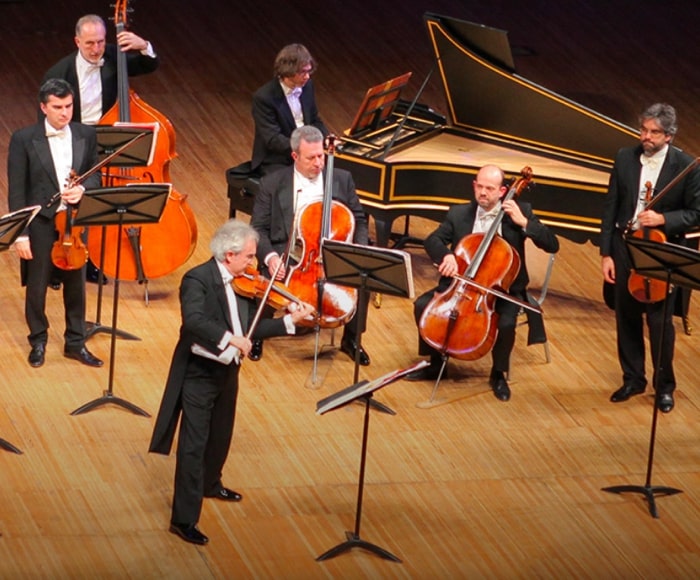 I Virtuosi Italiani, an ensemble which came together in 1989 is one of the most active and qualified formations in the international artistic panorama. They have performed in the most important theatres and main Italian and foreign music associations, collaborating with the most famous soloists and conductors from all over the world.Their recording activity is also notable with more than 100 CDs. produced for the major record companies with more than 400,000 records sold throughout the world, obtaining prestigious awards from the most important European magazines.The attention of the Virtuosi Italiani paid to philological research had led them to perform baroque and classical pieces, also with original instruments, adopting suitable tune up and temperament.Versatility distinguishes the philosophy of the group, together with the interest they have always shown for borderline repertoire, a meaningful itinerary the Virtuosi Italiani have followed to the highest levels, collaborating with artists of the calibre of G.Allevi, F. Battiato, G.Bregovic, U.Craine, C.Corea, L.Einaujdi, P. Fresu, M.Nyuman and C.Picco.The Virtuosi Italiani are the prime movers and interpreters of three musical seasons in Verona: “Sacred Music and Art”, “Concert Season” in the Sala Maffeiana and at the Teatro Filarmonico, and the “Concerts at the Vivaldi Church in Venice”.A prestigious commitment was the “Concert for Life and Peace” held in Rome, Bethlehem and Jerusalem last year broadcast in World-Vision by RAI on Christmas Day.
Reviews of: I Virtuosi Italiani al Teatro RISTORI