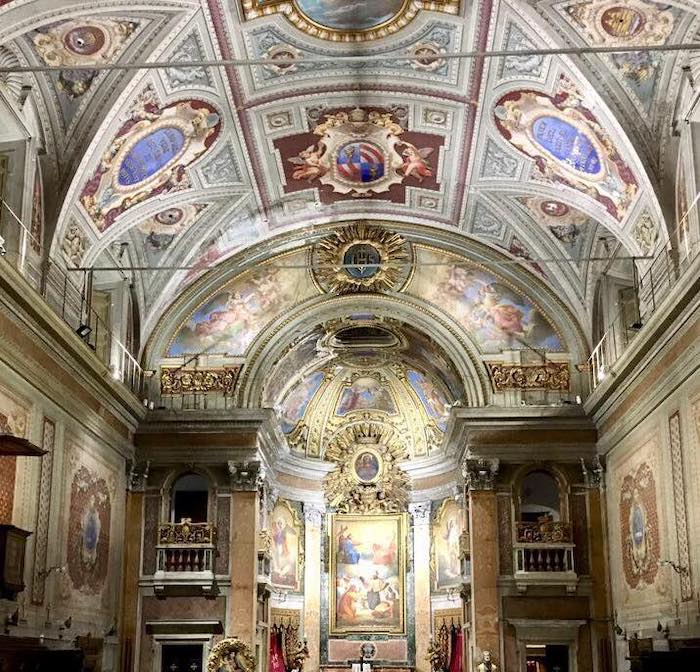 The "Chiesa del Caravita" (Church of Caravita), located a few meters from the well-known Via del Corso in Rome, is considered one of the most beautiful church of Rome. It is commonly called the Caravita oratory, named after its founder, the Jesuit Piero Caravita, who had it built in 1631. It stands on the ruins of the ancient St. Nicholas de Forbitoribus Church, dating back to 1192, and its main function was as family tomb for the noble families of the area. The interior has a nave preceded by an atrium, with a semicircular apse and an ambulatory on the back, is functional to the rites of the Oratorio, which included sacred musical representation or theatrical performances. The Church was restored in the second half of the 19th century, it preserved frescoes on the ceiling of the atrium regarding the &quot;Stories of Francis Xavier&quot; made by Lazzaro Baldi, while the altar is an altarpiece depicting the &quot;Holy Trinity and St. Francis Xavier&quot; by Sebastiano Conca. Worthy of mention the seventeenth-century carved walnut benches along the walls and the two holy water fonts, where the crab chela with the bronze crucifix symbolically alludes to St. Francis Xavier.