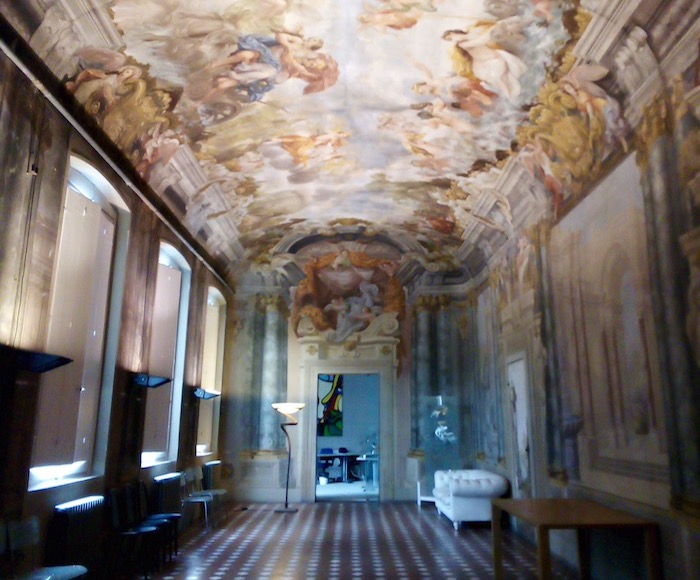 PALAZZO DEL PUGLIESE: The façade on via de 'Serragli, although showing the various reconstructions, is essentially due to the work of Zanobi Del Rosso, to whom we owe the beautiful windows with light railings on the ground floor. It is characterized by the ashlar on the ground floor with six windows, interspersed in the center by the portal, while the upper floors, marked by stringcourse cornices, are plastered and there are nine windowed windows (some are blind), with the cornices in stone that stand out on the white background. At the center of the main floor stands a large carved coat of arms of the Feroni, while other smaller and ancient coats of arms are walled on the sides. Compared to the relatively narrow street, the façade has a mainly horizontal development, covering sixteen axes on two floors plus a mezzanine. The molded door is original of the seventeenth century, with the four-wing hardware and an upper half-moon. from it you enter the entrance hall, with a wrought iron gate with an artistic design, concluded by a coat of arms of the Feroni (to the destrocherio, armed with natural, gripping pole (or bar), and surmounted by a lily). On Piazza del Carmine there is the secondary front of the building, with the central body delimited by pilasters and developed for seven axes, with a central driveway entrance (No. 2) and closed by an iron gate stamped by Feroni's alarm. The entire front was restored and repainted in 2010. The long section of the village of San Frediano has a front, with regard to the first and second floors, with eighteenth-century features, organized in seven axes on three high floors and closed by an eaves to the Roman. On the ground floor there were three large rooms used as stables and coach house, communicating with the courtyard of the main building on via de 'Serragli. The beautiful doors with the elaborate "picchiotti" and, in the middle of the front, the great shield with the Feroni's arms break off. The internal courtyard is very large, with two loggias covered by vaults with rounded arches facing each other, while on the other sides are blind arches with pilasters surmounted by capitals with leaves and scrolls (partly re-used). Typically eighteenth-century are the two thin balconies, on iron shelves. The entire perimeter of the courtyard is decorated with busts and statues, arranged around the middle of the nineteenth century. Finally, the environment enriches two monumental portals, with frames that culminate, at the top, in a gable with vases and busts, and two windows that balance the play of empty and full on the walls. Also noteworthy is the garden, known for having seen the first hydrangea plant in the city, cultivated here in 1804. ENTRANCE: Via dei Serragli n. 8, Firenze